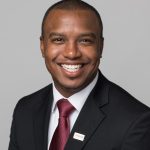 “Our conditions are NOT our conclusions.” Jordan Harrison is a professional speaker, DEI consultant and international youth development specialist born in Evanston, IL. He earned his BS in marketing from San Diego State and his Masters in Education from Harvard University. Most importantly, he is a disruptor to make a difference through service. He lives a mission-driven life focused on addressing inequality with the constant reminder of our collective shared humanity. His work has allowed him to speak to over 250,000 people in boardrooms, classrooms, prisons and conferences on anti-racism, equity, inclusion, and how to build people and institutions to thrive across differences.

He is currently the Vice President of Community Impact and Partnerships at Reality Changers where he has worked with over 5,000 8th-12th grade first-generation, low-income college-bound students in San Diego who attend universities around the world. In addition to his work with students and families, he works with fortune 500 companies, educational institutions, and nonprofits to solve their most pressing equity challenges seeking to solve how we can create environments where every person can succeed, no matter where they come from. 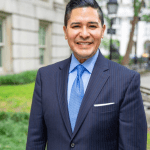 Richard a Carranza is the Chief of Strategy and Global Development for IXL learning. Having most recently served as the Chancellor of the New York City Department of Education, the largest school system in the nation, where he was responsible for educating 1.1 million students in over 1800 schools.

During Carranza’s more than three decades in education, he has served in virtually every role. Prior to New York City, he was the superintendent of the Houston independent school district, the largest school district in Texas, and the seventh largest in the United States. Before that, he served the San Francisco Unified School District, first as deputy superintendent and then as superintendent.  Before his move to San Francisco, Carranza was the Northwest Region Superintendent of the Clark County School District in Las Vegas. He began his career as a high school, Bilingual social studies, and music teacher, and then as a principal both in Tucson, Arizona and Las Vegas, Nevada. The son of a sheet-metal worker and hairdresser, Carranza credits his public school education for putting him on a path to college and a successful career. He believes that a great education not only changes lives, but also saves lives.

Donald Clinebell, JD, PBK is a distinguished author, lawyer, speaker, leadership coach, and a man of service.  He is a Phi Beta Kappa graduate of Pomona College and UCLA School of Law and its Trial Advocacy Program.  He is a former Deputy Attorney General for the State of California.  Donald is in great demand as a motivational and keynote speaker and lecturer in the fields of: Leadership and Service; the Power of Service and of “Service Driven™ Leadership;” and Mentoring and Tutoring Programs for kids at risk (“Community Service That Changes Lives”).

Donald is a Charter Member of the San Clemente Sunrise Rotary Club (chartered 1992).  In 1995, he became, and remains, its youngest ever President.  In the year of his leadership, San Clemente Sunrise earned seven District-wide awards, including Club of the Year, and two awards from Rotary International – including recognition of the Club’s 7th Inning Stretch Middle School Mentoring & Tutoring Program for kids at risk as one of three “model” Rotary youth programs worldwide.  During his tenure as President, San Clemente Sunrise more than doubled in membership.

For fourteen years (from 1997 through 2012), Donald spoke and taught at Rotary International’s annual SoCal-Nevada (now Southwest) Presidents Elect Training Seminar (“PETS”). During that time, Donald helped train more than 7500 incoming Rotary Presidents. Donald’s work at PETS was consistently received with rave reviews and evaluations.  Throughout his tenure at SoCal PETS, he was the highest rated Presenter/Trainer.  This Rotary year, Donald will deliver the Friday night Keynote Address, titled The Service Driven President, at Southwest PETS, on February 25, 2022.

Donald is a multiple Paul Harris Fellow.  In Rotary District 5320, Donald is currently Chief of Staff to District Governor Elect Dan Ouweleen (2022-23).  From 2016 through 2018, Donald served as “Executive Officer – Leadership” to Governor Ray Sanford and to Governor Ian Hicks.  He has served as an Assistant Governor five (5) times.  Donald is founder and Chair of and a proud mentor/tutor in San Clemente Sunrise’s multiple-award winning 7th Inning Stretch Middle School Mentoring and Tutoring Program for middle school kids at risk, now in its 26th year.  Founded by Donald in 1995, the year of his presidency, this program has touched the lives of thousands of kids at risk.  Truly “Community Service That Changes Lives” – the lives of the kids, the lives of the parents/caregivers, and the lives of Rotarian mentors and tutors – the program has received multiple awards, including the prestigious State of California Golden Bell Award for “…innovation and excellence in community-based school programs.”  The program has become a model for community-based mentoring/tutoring programs around the world, in Rotary and outside of Rotary.

Donald is the founder of The Clinebell Law Firm, with offices in Orange and San Diego Counties.  He now serves as Of Counsel to the firm. He is the proud father of two grown children, grandfather of two and is married to the love of his life, Barbara Clinebell, who breeds Champion-Sired Golden Retrievers and is a fully credentialed elementary school teacher.

Donald enjoys music (he is an accomplished baritone and pianist), long walks; and time with family. 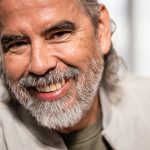 From international gaming phenomena to game-changing initiatives, Dutch-born entrepreneur and innovator Henk Rogers continues to pave the way in regenerating our home planet and working toward establishing permanent human settlements on the Moon and Mars.

Starting his career in computer gaming more than three decades ago, Rogers revolutionized the industry by creating Japan’s first Role-Playing Game (RPG) and later bringing the legendary game, Tetris, to the world.

Since then, Rogers has dedicated his career to research, development, advocacy and implementation of renewable energy sources in his adopted home of Hawaii.

Rogers continues to explore renewable energy and space settlement opportunities through his Blue Planet Research, which conducts R&D at his off-grid ranch on Hawaii Island. 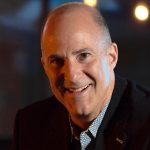 Brady is a past president of the Playa Venice Sunrise Rotary Club. For district 5280, he has served as an Assistant Governor, as a Membership committee and Policies & Guidelines committee member, and was chair of the Habitat for Humanity program in which 12 clubs performed over 1600 volunteer hours to build 10 homes for deserving families in Los Angeles.

As Senior Assistant Governor, Brady works with clubs large and small to help strengthen their memberships. He has conducted workshops, served as guest speaker at dozens of clubs throughout Zone 26-27, and was a keynote speaker for the district 5280 Foundation Celebration.

During his 35 year career as a television producer and director, Brady traveled to over 50 countries and all 50 U.S. states to document wildlife, natural disasters, and stories of everyday people. His credits include Extreme Makeover: Home Edition, The Great Christmas Light Fight, Survivor and The Amazing Race. During his time as Executive Producer of Extreme Makeover, his team built family homes, community centers, health clinics, and homeless shelters. They paid off mortgages, started dozens of businesses for homebound families, and distributed over one million dollars in scholarships to students of all backgrounds and ages.

Brady has been a Big Brother of Los Angeles since 1990, and resides in Marina del Rey, CA with his wife Lauri Chryss (also a television producer) and their two children. 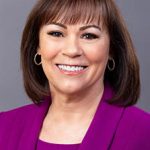 Vicki’s passion for leadership development has led to involvement in many aspects of education and development including District Trainer for District 5190,

Her most impactful experiences in Rotary are those involving youth: Rotary Youth Leadership Awards (RYLA), co-creation of a leadership program for 12–13-year-olds, Rotary Youth Exchange, and introduction of experiential team building processes to a RYLA camp in Benin, Africa.

Vicki and her husband Tim participated in a National Immunization Day in northern India in 2009.  Giving those two precious drops to a 2-year-old child at a train station in Moradabad and other life changing experiences of the NID made polio eradication very personal to them both.

Vicki graduated from the University of Utah with a Marketing degree and Master of Business Administration and went on to own a commercial electrical contracting firm in northern Nevada for 19 years before merging it into a public traded entity.

Vicki and Tim live in Reno, Nevada, at the base of the Sierra Nevada Mountains. Their blended family includes seven adult children, nine grandchildren, and three Rotary Youth Exchange, daughters. Their interests include outdoor activities and general aviation. Vicki and Pilot Tim are members of the International Fellowship of Flying Rotarians. They support Our Rotary Foundation as Major Donors and members of the Paul Harris Society, Polio Plus Society, and the Bequest Society. 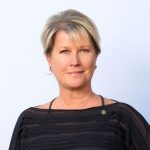 Jennifer is the Founder and President of Media Street Productions Inc., a twenty-five-year old, award-winning media company in Windsor, Ontario. She is a proud member of the Rotary Club of Windsor-Roseland.

Her talents have strengthened Rotary reach and impact, through many roles including as Trustee of the Rotary Foundation, RI Vice President, and co-chair of the End Polio Now: Make History Today campaign, raising funds alongside Bill and Melinda Gates and their Foundation.

Jennifer is a leader in cultivating “experiential fundraising” opportunities such as Rotary’s Polio Golf Day with Jack Nicklaus in Jupiter, Florida, USA, which raised over $5.25 million for polio eradication in one day. Or, the innovative, virtual COVID-19 #RotaryResponds event that raised money for COVID-19 relief projects and showcased Rotary’s response across the globe.
Working alongside political figures, celebrities and global leaders, she uses her voice to raise awareness and hundreds of millions of dollars to eradicate disease, support peace and provide clean water and sanitation in developing areas of the world. Her skill as an expert storyteller inspires hope and promise and motivates people to take action.
She has received many honours and recognitions including Rotary’s Service above Self Award and the Citation for Meritorious Service, the YMCA Peace Medallion, the Queen’s Diamond Jubilee Medal, and Wayne State University’s Peacemaker of the Year Award – a first for a Canadian.

Jennifer is married to Rotarian Nick Krayacich, a local family physician. They share a love for many things including travel, cycling, golf and relaxing at their family cottage; and they share a thirst for adventure, which has included cresting the summit of Mount Kilimanjaro in Tanzania, Africa.