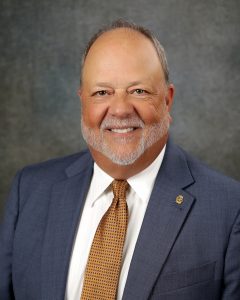 Don started his Rotary journey in April 2014 with the Rotary Club of Indio, CA.  In his time there, he led the club as President in 2017-18, served as the Public Relations Chair for six years, as well as the Membership Chair for one year. Don has spearheaded or assisted with many project committees with the club, including chairing the club’s signature event – the Coachella Valley Middle School Math Field Day.

For District 5330, Don helped the district by chairing a Fast Pitch Competition in September 2018, as well as the District Conference in 2019. He also served on the committee that staged an outdoor Holiday Fiesta for the Coachella Valley in December 2018. In Rotary year 2019-20, Don was co-chair of the District’s Foundation Gala and served as the District’s Vocational Services Chair.  He was an Assistant Governor during 2020-21. Don is a Paul Harris Society Member and a Major Donor. He is also a graduate of the Rotary Leadership Institute in District 5330.

A native of Peoria, IL, Don received his Bachelor of Science in Business Management and Administration from Bradley University. Professionally, he spent ten years in live entertainment and arena facility management, before changing careers to casino marketing. The last 30 years, Don has worked at five different casino properties in four states, including the last 14 years as Vice President of Marketing at Fantasy Springs Resort Casino in Indio, CA. Don and his bride, Veronica, reside in Bermuda Dunes and share three grown children.