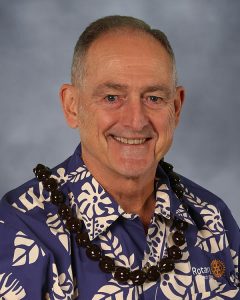 Randy Hart is Director of Kilauea Military Camp (KMC) and proud member of Rotary Club of Hilo and Rotarian for 30 years.  First joining Rotary Club of Hilo in 1990, then due to job reassignment transferred to the Rotary Club of Wahiawa/Waialua for two years, then back to Rotary Club of Hilo in 1994.
Randy spent 38 years in the military, 19 active duty & 19 in the Army Reserve.  Retiring from the uniform side of the military in 2013 but continuing his service today as a civil servant.  His military service has taken him around the world on many varying assignments.  Culminating with a deployment in Iraq in 2005/2006 and his last six years as a Brigade Commander.  Randy has been the Director of KMC since 1994.  KMC is a military recreation lodging (resort) operation inside Hawaii Volcanoes National Park.    Attended High School in Illinois and graduate of Eastern Illinois University.
Randy was club President in 2016/2017.  A recent graduate of the Rotary Leadership Academy and is currently serving his third year as Assistant Governor, 2017-2020.  He will as District Leader for the Island of Hawaii, 2020/2021.  Participated in an International project in Bali, Aug 2020, a humbling experience.  He also serves on the Rotary Club of Hilo Foundation board and on the board of directors for Hawaii Care Choices.  Randy is humbled and honored to serve as the D5000 District Governor in 2022/2023.
Randy and his wife Lydia, have four children and three grandsons.